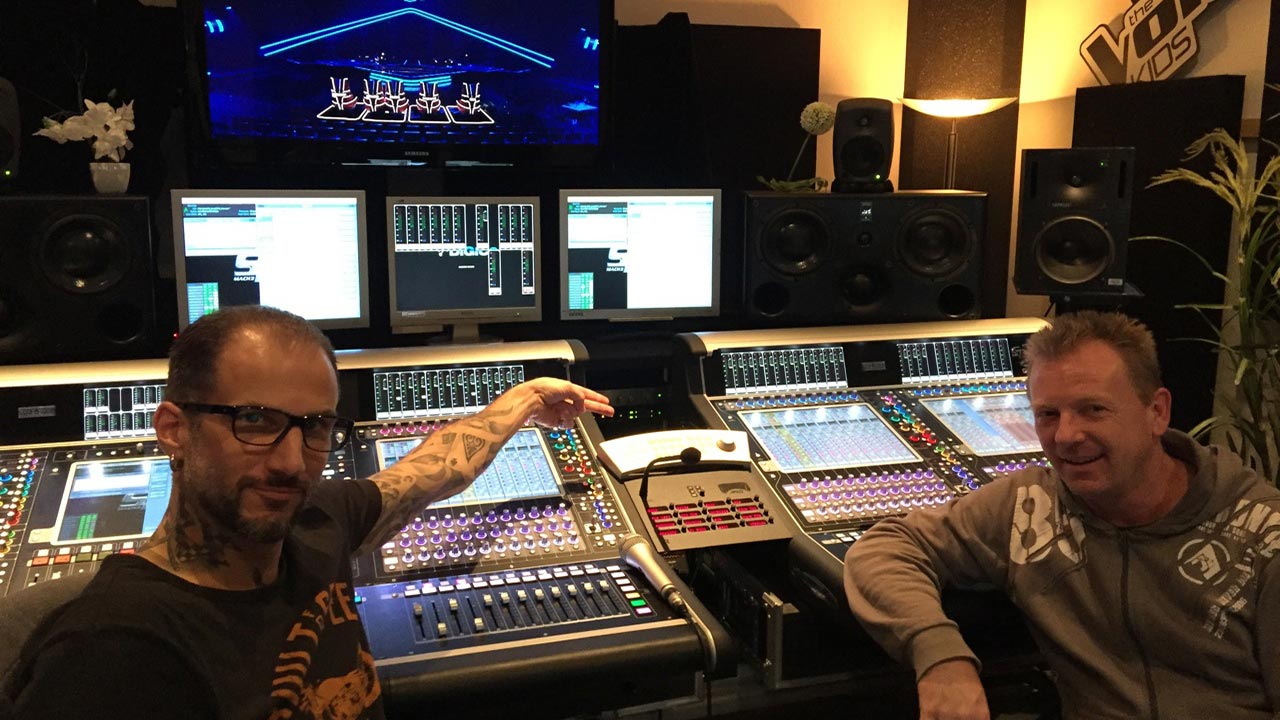 When the pressures of a live TV show weigh in on the audio mix engineers responsible for adding stunning sound to make the pictures come alive for eager audiences, the right monitoring gear is essential, and it’s why Toni Kern, at The Voice of Germany, chose both the Dangerous MONITOR ST monitor controller and recently added the new Dangerous CONVERT-2 DAC. “The Convert-2 is really easy to use, it sounds really great—and it sounds natural. And it’s definitely much more accurate than the setup we had before which was only analog monitoring. Now we listen to the exact same digital signal that we send to the live broadcast, and we are hearing it through the Convert-2. We feel very confident about what we are sending to the broadcasters because of this, and the mix is better because of it too.” The German show, similar to the popular US version, The Voice, has featured live performances by top artists such as Cold Play, Robin Schulz, Elle King, James Morrison, Ellie Goulding, and Jess Glynne.

“We have been doing the Voice of Germany for five seasons,” adds Kern. “We also do The Voice Kids, it’s the same style as the adults’ show but for kids 8-to-14 years old. For the live shows, I’m mixing the music broadcast mix. We have been using the Dangerous MONITOR ST since the first season as our monitor controller in our broadcast room. Last season, we used the MONITOR STwith the new Dangerous CONVERT-2 D-to-A converter.”

Kern mixes the bands for the two shows which vary according to what the songs need for that broadcast, often he’ll have up to 80 inputs from the band running live. His co-mixer, Stefan Kling, focuses on just the vocals, they work side by side on a Digico SD7 console with the fader expansion EX-007. The MONITOR ST sits between them and is key to the control of what they are sending to the live broadcast, “To be able to instantly switch between our three sets of monitors is the other most important part of the Dangerous Music monitoring system that we put together,” says Kern. They use two models of Genelec monitors and a pair of ATC monitors in their mix room.

Kern notes that from day one, 5 years ago, when he went live with the Dangerous MONITOR STcontroller switching speakers and controlling the volume in their mix room, it all worked perfectly. And now with the Dangerous CONVERT-2 DAC he is even working more confidently, “It’s great, I love it! And the Monitor ST remote is the best, there is one knob, which is the most important knob in the broadcast room: It’s for the volume. And the remote has my favorite buttons where I can switch between the monitors.” It’s very important to the engineers that they hear the mix on different monitors so they can be assured that listeners to the live TV audio hear the best mix. With the Convert-2, “It’s much more accurate,” Kern says.

Describing some of the setup capabilities built-in to the Monitor ST, Kern reveals, “Every season of the show I check the MONITOR ST and I make little changes between with the levels for the different monitors, you can imagine when I switch between the different speakers, I don’t want the volume to go up and down. The way the balance settings work on the MONITOR ST is really easy, it works perfectly for me.”

With two people mixing the show simultaneously, the vocal mixer, Stefan Kling, is focusing on compressors, or EQ, and level and whatever he needs to for the vocals as the singer performs live, and Kern has an often very large live band that he’s mixing. “We have a drummer, percussion, two keyboardists, two guitar players, bass, three backing vocals, four strings. And then for some songs, additional musicians, sometimes with nine strings or six backing vocals for example. Then, every show, one of the coaches performs with their live band, or sometimes they will perform with our studio band. And we have show acts such as Coldplay or star guests singing with our talents. In season 5 of The Voice of Germany, the coaches were Andreas Bourani, Rea Garvey (former lead vocalist from Reamonn), Stefanie Kloss (lead vocalist from Silbermond), and Michi Beck & Smudo(rappers from Die Fantastischen Vier).

The second, vocal-only, mix engineer has a very stressful high-pressure job, “He has his finger on the fader the whole time,” says Kern about his co-mixer Kling. “He’s always riding the vocal microphone fader and he concentrates just on the vocals, that’s the reason why I told the show management I wanted someone just doing that. Because, imagine, normally you can do it alone, I’m sure, but I am mixing a band with sometimes 80 inputs. Then, when the singer is not steady and you have to ride their vocal the whole time, it’s difficult to concentrate on the details. So we are depending on theMONITOR ST and the CONVERT-2 to work perfectly so that we don’t have to think about that, that it’s just going to work: ‘I want to get to the next speakers’- ‘I want to hear the ATCs’ -‘Back to the Genelecs’ – ‘Okay.’ I can just look over and know that everything is working correctly.”

But the popular talent TV show is carefully produced as well, with rehearsals and test mixes to prepare for the best live mix, “The days before the live show are really long, because we are sitting together with the band, with the musical director, and we are mixing from a big Pro Tools system, which records every time they all rehearse. So that after each sound check, after the rehearsals, we can mix those recordings with the musical director during the night—before the actual show. We have various rehearsal days with the bands, and with the vocal talent, we record all of it and we do test mixes from those recordings—lots of details are sorted out for the live mix to come. Then on the show day, we are mixing live because it goes straight to television. But we have prepared many things for the mixes,” explains Kern. “It’s huge. And the MONITOR ST and CONVERT-2 play an important role in the process, testing pre-mixes and preparing for the live show. We depend on the Dangerous Music gear immensely, having the CONVERT-2 now, it is exposing any character that we like or don’t like and we can make adjustments to the mixes that way much more easily.”